Tehran is hip. Really. For some, the city may conjure up images of stern-faced clerics and women enveloped in black chadors or demonstrators shaking their fists and yelling “Down with America” – or more recently “Down with the dictatorship”. For me, Tehran is filled with vibrant youthful energy.

Thanks to a population boom in the 1980s, two-thirds of Iran’s population is under the age of thirty and it’s impossible not to notice the youthfulness of the crowds on the street. No wonder, then, that Tehran has more than its share of hip haunts.

Let me take you on a quick tour of some favorite Tehran hangouts:

We’ll start with brunch at the Blue Duck (Ordak Abi), a restaurant in the multistory Tandis Center that towers above Tajrish Square. The fare here is best described as East Meets West, served buffet-style. You’ll find everything from Iranian aash (bean and herb stew), halim (wheat porridge) and adasi (lentils) to French toast, pancakes with date syrup and eggs made to order. At the cold buffet across the room, the choices include cereal, yogurt, fruit, European pastries and my favorite Persian breakfast: flat bread with creamy white cheese, sliced cucumbers, juicy tomatoes and walnuts. We’ll pile our plates high, make a quick stop at the juice bar, grab one of the window booths, with their red vinyl benches, and tell the white-aproned waiter to bring us coffee or tea.

After brunch we’ll head across the square to the Tajrish Bazaar, a smaller and more upscale version of the Grand Bazaar downtown. I always make a beeline for the vegetable market at the center of a big stone hall with vaulted ceiling. The prices here are much higher than at the meydoon where my mother-in-law shops, but I like to admire the artful way in which the vendors arrange their produce.

Next we’ll take a taxi down Vali Asr Avenue to Vanak Square with its classy – and expensive – boutiques. I could use a new manteau and add to my growing collection of brightly colored scarves. Just because Islamic law dictates that women cover their hair and bodies doesn’t mean we have to look drab and dowdy. Vanak is the place to go for Islamic chic. Manteaus are getting shorter, tighter and more stylish all the time. They come in a rainbow of colors as well as poncho-style, form-fitting, belted, striped and embroidered. You can pair them with a scarf from the shop next door, which offers them in every color, style and fabric, made locally or imported from India, Italy and Japan. 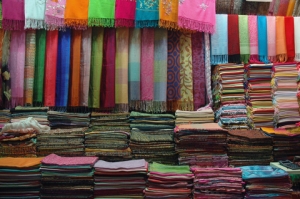 Shopping is exhausting work, so we head back uptown to the Super Star, a fast food joint that is like McDonald’s, Pizza Hut and Kentucky Fried Chicken all rolled up into one, complete with staff in blue and yellow uniforms and baseball caps. There is even a play area for kids featuring a yellow plastic slide.

Past the restaurant and up a short flight of stairs is a dimly lit coffee shop with the low key elegance of a jazz bar. Black armchairs cluster around wood-topped tables and abstract collages adorn the walls.

The machines lined up along the sleek bar promise a range of coffee types, from Turkish and cappuccino to espresso and an ordinary cup of Joe. There is no jazz playing here, just the buzz of low voices and the gentle click of the computer keys from the next table, where a guy is tapping away at his laptop, perhaps checking e-mail or updating his blog.

Heidi Noroozy is a translator, blogger, and writer of multicultural crime fiction. Her short stories appeared in German crime anthologies and have been translated into five languages. Her Cold War story, “Trading Places,” was published in the “Secret Codes” issue of Nautilus. She lived in the GDR in the 1980s and holds a degree in German language and literature from Leipzig University. She makes her home in Northern California with her Iranian-born husband and is currently writing a novel set in modern-day Iran.
View all posts by Heidi Noroozy →
This entry was posted in Persian culture, Tehran and tagged hejab, Tajrish, Tandis, Vanak. Bookmark the permalink.